“In her word-experiments with the unseen forces at work in our lives—the pushes-and-pulls of parenting, the moments of quiet natures observed, the energies stored and released by objects of art both great and small—Lisa Stice captures an essential and modern magic. Read, and reflect. Read, and be changed.”
— Randy Brown, author of So Frag & So Bold  and Welcome to FOB Haiku: War Poems from Inside the Wire
“There is so much life in these poems—daily life, and overarching life. As with Sylvia Plath, Louis MacNeice, Natasha Trethewey and others, Stice brings visions of war and peace, violence and tenderness, into the sort of troublesome, necessary contact we should always keep them in.”
— Andria Williams, author of The Longest Night: A Novel“Don’t let the quiet moments fool you. Stice highlights […] the spaces between our worries about the outside world, and the inner lives of our families. Her daughter inspires us to be strong when she says that her dog ‘makes me braver.’ Stice asks Sun Tzu to teach her to be ‘serene and indestructible.’ Her poetry shows that she learned how.”
— Eric Chandler, author of Kekekabic and Hugging This Rock: Poems of Earth & Sky, Love & War

“The best poems in this collection are the ones that seem the simplest. The longer you wait after finishing them, the deeper they sink into your being—a seemingly effortless transportation into how the weight of being a military spouse can find its way into the everyday. In life, as in these poems, sometimes the silent spaces are the most powerful.”
— Colin D. Halloran, author of American Etiquette, Icarian Flux, and Shortly Thereafter

Creative Energy from the Homefront: A Review of Permanent Change of Station reviewed by Kersten Christianson on The Poetry Shed

Time of the Season (Seasons of My Military Student, Permanent Change of Station and The Confusion of Languages), reviewed by Andria Williams on The Military Spouse Book Review

“Lisa Stice’s new poetry collection […] is spare and lovely. Shadowed by deployments and military moves, Stice demonstrates how the smallest, most tenuous moments in life can illustrate a family’s larger joys and fears.”
—Siobhan Fallon, author of You Know When the Men Are Gone and The Confusion of Languages

“By using a language […] that plays philosophically with the meanings of
military terminologies, Lisa Stice produces a cartography of domestic space that is riddled with loss. […] Stice celebrates the moms and kids who ‘hold down the fort’ back home, expressing awe at all the ways they find to survive and thrive.”
—Lynn Marie Houston, author of the poetry collections Unguarded and The Mauled Keeper

“The experiences [Lisa Stice] writes of—the losses and realizations—are part of a military life that often feels simultaneously impenetrable and inescapable. Absence, isolation, and relocation become habit we don’t often read about, because part of us breaks in every move we do not choose, every uncertainty we are told to sustain […]”
—Abby E. Murray, author of the poetry collections How to Be Married After Iraq and Quick Draw: Poems from a Soldier’s Wife

“[…] While reading this collection, I found the poems visiting me all throughout the day, found myself nodding, yes. Stice’s work never disappoints. She has an eye for the little detail that will break your heart.”
—Andria Williams, author of The Longest Night: A Novel

“Lisa Stice’s poetry resonates in the oft-unsounded silences of military life. It sings with the learned, quiet endurance of Marine Corps families who pack and unpack, tend the roots during every transplant, wait, tire of waiting, hope, know better than to hope, nurture their selfhood, and grow—because nature demands it. Her verse conjures presence in its very absence.”
—William Schuth, poetry editor of the literary journal The Deadly Writers Patrol

Uniform (Aldrich Press, 2016) – available on Amazon and at the Kelsay Books bookstore

What I Took for Granted: A Review of Uniform by Lisa Stice, reviewed by Eric Chandler on Shmotown

Clamor, Sweet Insurgent, and Uniform: Three Collections of Poetry from Before, During & After Wartime, reviewed by Andria Williams on The Military Spouse Book Review

An Unconventional Review of Uniform by Lisa Stice, reviewed by Kathleen M. Rodgers on The Military Spouse Book Review

In this unflinching debut collection of poems, Lisa Stice opens a conversation that we have long needed to have and hear: the experience of military spouses who watch war, sometimes achingly and sometimes bitterly, from the home front, part of a system and bound by its rules and yet not quite by direct choice (“you may hold his left hand / if he’s not in uniform”). The formal play of these poems echoes the experiences they render.  Found text, fragmentation, and syntactical play enact the brutality done to community and communication by the bureaucracy of the military, at war and at home:
We’re at the Redwoods/
at the natural history museum/
(insert family vacation)
can you at least pretend to have fun?
Uniform will resonate with any who have experienced the violence of separation, the doubt and difficulty of reunion, the dehumanization of institutions, of the harm of the unsaid or unsayable.  It is a brave and vulnerable book.
– Elizabeth Bradfield, author of Once Removed (Persea Books)

Through Lisa Stice’s moving first collection Uniform, we live a young woman’s struggle to integrate herself into a culture as foreign to her as the one her husband is deployed to.  Stice’s narrator is newly married to the U.S. Marine Corp itself, it seems, as much as her husband, and it is with courage and consistent authenticity that Stice explores the inherent conflict of a third party involving itself in an institution traditionally reserved for couples only.  As the narrator wrestles with the difficulty of the discovery of self in conflict with society, the reader is forced, rather than simply invited, to engage with this most human of problems.  This is true power expressed through true art, and we can’t escape it unchanged, though we may echo the hope of reconciliation of self with culture, that in the end “Maybe we will dance./Maybe we will retire early.”
– Randy Phillis, author of The Plots We Can’t Keep Up With (Encircle Publications) 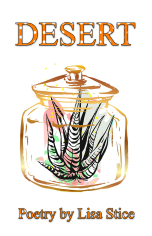 In Lisa Stice’s Desert she paints an American landscape with sharply focused details and deep insights into the fates of its inhabitants. The people she sketches yearn to transcend or escape the sun-baked world that holds them in. From the young woman who kicks “rosy boa and sidewinder slither marks” to the dreamer who thinks he can find a lost Spanish galleon in the Mojave Desert, the poet shows us these lives with the knowledge of someone who has lived in this world and the compassion of a writer with true heart.
– Zack Rogow, poet and translator; author of Talking with the Radio: poems inspired by jazz and popular music

Desert by Lisa Stice welcomes readers into a world so richly rendered, you can almost hear the coyote song. Each poem pinpoints an element of desert life, whether it’s the experience of the locals, tourists, or the landscape itself, with its “rippling Mojave heat.” Stice’s precise craft reminds us that magic lives among the mundane, or even that the mundane is its own sort of magic, either through a “dusty pilgrimage” or a “sky of fishes” or in searching for “a flying nun/ who had fallen out of the sky.”
– Raquel Vasquez Gilliland, poet; author of Dirt and Honey